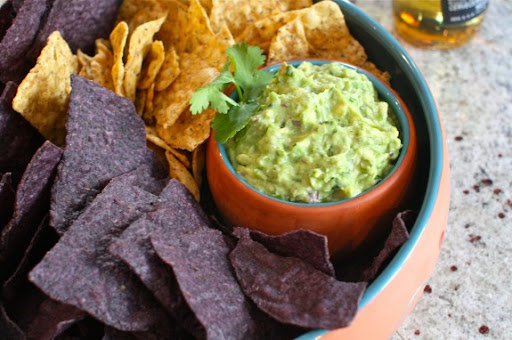 Before my youngest daughter could speak in more than one word sentences, she’d
formed an intense love affair with guacamole. Ate it with a spoon. And when she’d
licked her bowl clean, screamed for more. No matter how spicy I made it, she
would wolf it down, tears streaming down her plump little apple cheeks. I’m not
sure exactly when the tradition started, but since my girls were small, Guacamole
Friday has been a long-standing ritual in the Ford home. In fact, if family and/or
friends invite us for supper on a Friday, we respectfully decline. My daughters,
now teenagers, still schedule their busy social calendars around this particular
meal. Then, a few years ago, we bought a quesadilla maker, and Guacamole Fridays
morphed into Quesadilla Fridays.

Avocados.
(Four-five makes a medium sized bowl. The avocados are the most important
ingratiate so choose wisely. Too hard will be tasteless and also kill your hand
when smashing. Too soft will be rotten when you slice them open. Ew! When
choosing avocados, squeeze, pressing firmly with your thumb. The meat right
under the skin should be soft but grow firm the deeper you press.)
Roma Tomatoes, diced.
(One less than the amount of avocados you’re using. Roma tomatoes are the
best choice because they are less juicy than other varieties.)
Finley chopped Yellow Onion to taste.
(About two tablespoons for a medium bowl.)
Chopped, fresh Cilantro.
(Don’t skip the cilantro. If you don’t like cilantro then don’t eat guacamole.
Sorry, I have unreasonably strong opinions about this and very little patience
for people who say they don’t like cilantro. It’s the best herb ever!)
Jalapeno to taste.
(I use dried, but pickled work too. Fresh is harder to control the intensity of
the heat. Two or three seeds from a fresh jalapeno will likely pack a sufficient
punch.)
Garlic Powder to taste.
(I usually just shake some over the top, mix and taste. Tasting is the best part.
Sometimes I taste a few extra times just to make sure. It never hurts to be
thorough J)
Lime juice.
(Squeeze half a lime over the top.)

Combine all ingredients in a bowl and then stir with a fork, smashing down on the
firmer chunks of avocado, until combined.

Pico de Gallo.
(Finely diced Roma tomatoes, yellow onion, cilantro mixed together.)
Shredded Cheese.
(We use a mixture of cheddar and pepper jack. For those of you who are
lactose intolerant, I’ve found that the veggie shreds, cheddar/pepper jack
mix, work well as an alternative.)
Cubed, Seasoned, Sautéed or Grilled, Chicken or Beef.

Layer bottom tortilla with chicken or beef, Pico and then cheese. Don’t over due it
with the cheese. It’ll just melt, run out from between the tortillas and make a mess.

Grill. Lightly brushing the top of the tortilla with oil will make it brown and crispy.

Unless you possess an aptitude for flipping hot, floppy tortillas stuffed with chicken,
Pico and cheese without the contents spilling out, you’ll need a quesadilla maker. I
bought mine at Target—the most magical place on earth.

Cut into wedges with a pizza cutter. Top with Julie’s Famous Guacamole.

And, do you what goes really well with quesadillas and guacamole?

A modern, Southern twist on the classic Gothic romance novels of Rebecca and Jane
Eyre, Replacing Gentry follows a woman’s precarious journey as she learns the truth
about the man she married.

When Marlie agrees to attend a cadaver ball at Vanderbilt Medical School, she did not expect to actually see any cadavers. Or, that a strange apparition would issue her a chilling message.

Despite the cadaver's warning, Marlie is married a year later to Tennessee State Senator, Daniel Cannon, and living in a plantation-style mansion with two step sons. Add to the mix her growing suspicion that something is amiss with the death of Daniel’s first wife, Gentry; and newlywed Marlie is definitely in over her pretty Yankee head.

What begins as an innocent inquiry into her new husband’s clouded past, ends with Marlie in the midst of a dangerous conspiracy.

A modern twist on the classic Gothic romance novels of Rebecca and Jane Eyre, Replacing Gentry follows Marlie’s precarious journey as she learns the truth about the man she married.

Grab a copy!
Replacing Gentry is just $1.99 on Amazon

Julie N. Ford graduated from San Diego State University with a BA in Political Science and a minor in English Literature. In addition, she has a Masters in Social Work from the University of Alabama. Professionally, she has worked in teaching and as a Marriage & Family Counselor. She is the author of two women’s fiction novels, The Woman He Married and No Holly for Christmas, published in 2011. In addition, she wrote a romance/chick-lit novel, Count Down to Love, also published in 2011. Count Down to Love was a 2011 Whitney Award finalist. Her next novel, Replacing Gentry, is due for release April 9th, 2013.

Currently, she lives in Nashville, TN with her husband, two daughters and one hedgehog.

Journeys of The Zoo said...

Stopping by to make sure that I entered all your amazing giveaways.

Thank you so much for linking up to my Weekly BlogLovin Hop, http://www.journeysofthezoo.com/2013/04/bloglovin-linky-thursday-april11.html.

Your support is relentless. Thinking of you.

Besos, Sarah
Blogger at Journeys of The Zoo
Finding Humour in Everyday Life

Get free stuff, including gift cards by using Swagbucks. I've redeemed $25.00 worth of Amazon gift cards, but they have other gift cards and prizes! Go and check 'em out, or if your already a member, you can use this engine to search or find out what's going on around Swagbucks!